The Fine Arts G. Zanabazar Museum was established in 1966 and named after the Buddhist teacher, G. Zanabazar (1635 - 1724) It contains items that reflect the rich cultural history of Mongolia. 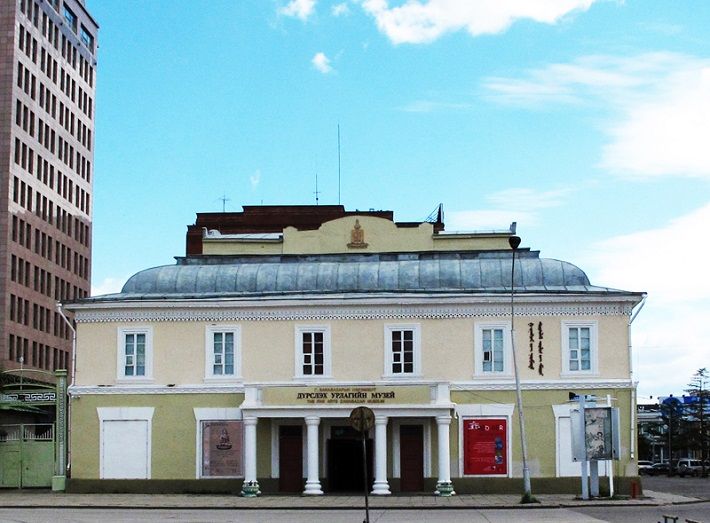 The Fine Arts G. Zanabazar Museum was established in 1966 and named after the Buddhist teacher, G. Zanabazar (1635 - 1724) It contains items that reflect the rich cultural history of Mongolia.

From earliest times until the early twentieth century The museum is renowned for the works of G. Zanabazar (1635-1724), which include the statues of Sita Tara, the Five Dhayani Buddhas, and the Bodhi Stupa. As well as the Museum displays the artistic works of Mongolian masters of the 18-20th Centuries, coral masks, thangkas, as well as the famous paintings of B. Sharav entitled “A Day in Mongolia” and “Airag feast”.

The Museum contains 13000 objects. The exhibition hall regularly hosts the works of contemporary artists. Special attention attracts paintings by Marzan Sharav depicting with a slice of humor and irony scenes from the everyday life of Mongols in the turn of this century.

As you enter the building on the left, a room displays ancient art, including deer stones that date to the Bronze Age. To the right is a shop selling souvenirs and contemporary art. The building itself carries some historical value. It was built in 1905, making it one of the oldest Manchu-era commercial buildings in the city. It was first used as a Chinese Bank, Soviet troops stayed here in the 1920s and it later served as Ulaanbaatar’s first State Department Store. It has been an art museum since 1966.