Taikhar Chuluu (Taikhar Rock) is one of the tourist attractions when traveling to Arkhangai province. This big 20-meters (66 feet) high rock stands on a bank of Khoid Tamir River in Ikhtamir Soum. 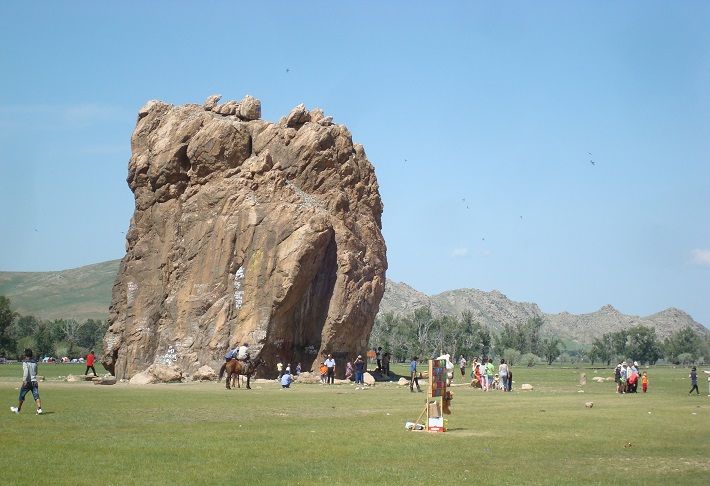 Taikhar Chuluu (Taikhar Rock) is one of the tourist attractions when traveling to Arkhangai province. This big 20-meters (66 feet) high rock stands on a bank of Khoid Tamir River in Ikhtamir Soum.

It’s covered with 150 writings in many different languages and dating back from many different periods (runic, Sogd, Uyghur, Mongolian, Nangiad, Tibetan writings). The oldest one is the runic writing, related to Turkish period of the 6th and 7th centuries. An ovoo was placed at its top.

Unfortunately, there are much graffiti on this rock and the old writings almost disappeared. This cliff was formed by separating from the river bank due to millions of years’ continual flow of Khoid Tamir River through granite cape on its northern bank. The government issued a law to protect the rock in 1994. graffiti.

Legend: A 20m high, big granite Taikhar rock has an interesting story. Once upon a time, a giant snake came out of a hole and started swallowing local people and animals. Local people asked for a help from a strong brave man named Bukhbilegt (Strong and wise. Then he fought with the giant snake and pushed it to the hole and put the big rock on its head.

The giant snake tried to come out under the hole so that Bukhbilegt put his favorite arrow and bow on the big rock, Taikhar. Then, the giant snake couldn’t move. Local people say that if you see the Taikhar rock from a higher place, you will see an arrow and bow. Over 150 inscriptions in various scripts including Tibetan, Turkic, Mongolian and Chinese were carved on the Taikhar rock, but most of them seem to have barely appeared as time passes.