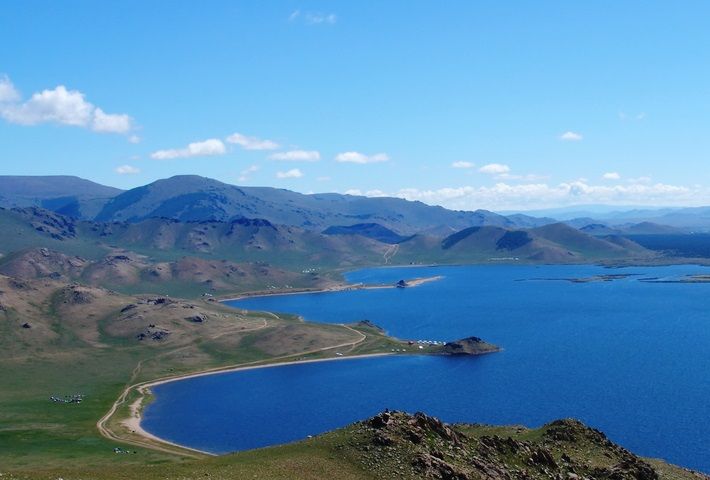 Freshwater and volcanogenic Terkh White Lake, is 16 km long from west to east and 6km wide from north to south. Khorgo dormant volcano, Terkhiin Tsagaan river, and Khuduu river have been protected as a National Park since 1995. This lake was created as a result of a 4050 cm thick basaltic blockage of  Terkhiin River, following the eruption of Khorgo volcano and some other volcanoes.

The highest Khorgiin togoo is located on the east shore of Lake Terkhiin Tsagaan. From its summit, has a splendid view over the whole region and the lake. Terkhiin Tsagaan has more than 10 species of fish such as Taimen, perch, lenok, and pike. It’s registered in Ramsar’s Convention because many birds including swan, shelduck, duck, gull, common heron and great white egret gather here. There is a small Island with 500sq km area and 28m relative altitude, called Nuuriin Tolgoi, in the middle of the lake.

About ten small rivers feed the White lake of the Terkh. Ten narrow rivers confluence to the Terkhiin Tsagaan Nuur. Legend: Once upon a time, before the Lake was originated, the place with good grassland and amazing steppe was being. There were a well and supply with fresh water people who used to live near the territory.

One day, the elderly couple forgot to close the lip of the well after they fetched water. But the water of the cistern flooded the valley and people bustled and shouted "Khorgoogooroi”.