Tuvkhun temple is located on a rocky mountain hill surrounded by forests at the top of the mountain in a secluded area. 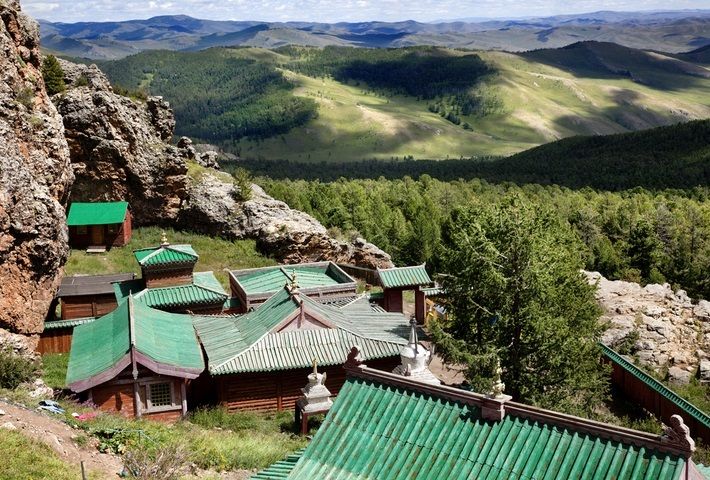 Tuvkhun temple is located on a rocky mountain hill surrounded by forests at the top of the mountain in a secluded area.

The great sculptor and one of the biggest representative of Buddhism Zanabazar were attracted to this place at his early teen years and in 1965 ordered his people to build a small house for studying. It became a place of his for meditation and artworks. He made his famous creations in the monastery.

After the burst of Galdan Boshigt khan, this place was forgotten till the end of the 1700s. From 1773 this favorite place of Zanabazar restored. Behind this temple, there is remarkable small cave called ”Uterus of Mother” where people can slip in and slip out. This process symbolizes a re-birth of and purifying the person.

Near the top of the staircase, to the right of temples, are two wells about fifteen feet from each other. One has fresh water in it, while the other has slightly brackish water. No one has been able to explain why one is brackish and one not, or for that matter, how there can be wells at all here in their solid rock very close to the summit of the mountain where ordinarily there would not be any underground water sources.

Another name of this unique and mysterious temple is Pilgrim’s cave: it’s hidden in a mountain at the over 2600meters above sea level. The small temple was heavily damaged by communists during the upheavals of the late 1930s. During the summer of 1997 extensive ceremonies were performed here and a new statue of deity Gombo Makhagal (Mahakala) was placed in the top of refurbished and consecrated. Several monks live at the monastery full time. Today it still keeps it's mysterious and therefore attracts tourists a lot.