Known as “The Dark Blue Pearl” Lake Khovsgol is Mongolia’s largest and second-most voluminous freshwater lake in Asia and 1% of all the fresh water in the world. 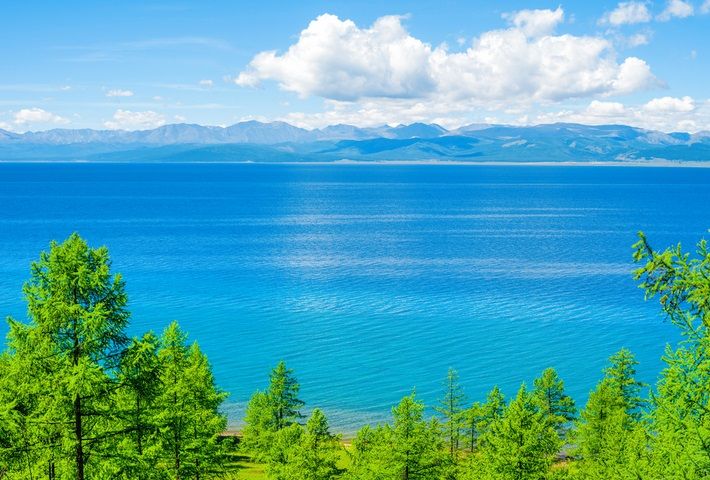 Known as “The Dark Blue Pearl” Lake Khovsgol is Mongolia’s largest and second-most voluminous freshwater lake in Asia and 1% of all the fresh water in the world.

This lake is located about 900 km (560miles) northwest of Ulaanbaatar. The lake is habitat for nine different types of fish, including the Siberian grayling, Arctic cisco, freshwater cod and Siberian catfish. As well as the area is home to argali sheep, ibex, bear, sable, moose and a few near-sighted wolverines. It also has more than 200 species of bird, including the Baikal teal, bar-headed goose, black stork, and Altai snowcock.

Khuvsgul lake is said to be linked to Baikal Lake by an umbilical cord. Another wonder of the Khuvsgul region is deer stones left behind by bronze-age men. The locals can say many legends about those styles of stags which stands in a place called Uushgiin uvur 20 km from the Aimag center Murun.

Khuvsgul is home to the southernmost indigenous reindeer herding people in the world, the Tsaatan who originated from Tuva in Siberia. The Tsaatan’s unique lifestyle and the taiga environment in which they live represent one of the most distinct cultural and ecological pockets of Mongolia. Residing in the rugged taiga ecosystem of Huvsgul Sayan Mountains, the Tsaatan are Mongolia’s smallest ethnic minority with less than 300 individuals living in the taiga and only couple of hundred more living in towns and cities.

They are highly nomadic, reindeer herding people who have moved throughout Mongolian-Siberian border region for millennia. Unlike their steppe dwelling counterparts, the Tsaatan live in teepees, which are better suited for their forest environment, and which are more portable than Gers allowing the Tsaatan to move with their reindeer as often as 10 times per year.