One of the most spectacular events in Mongolia during autumn, the Golden Eagle Festival is celebrated in Bayan Ulgii province, in the far west of Mongolia. 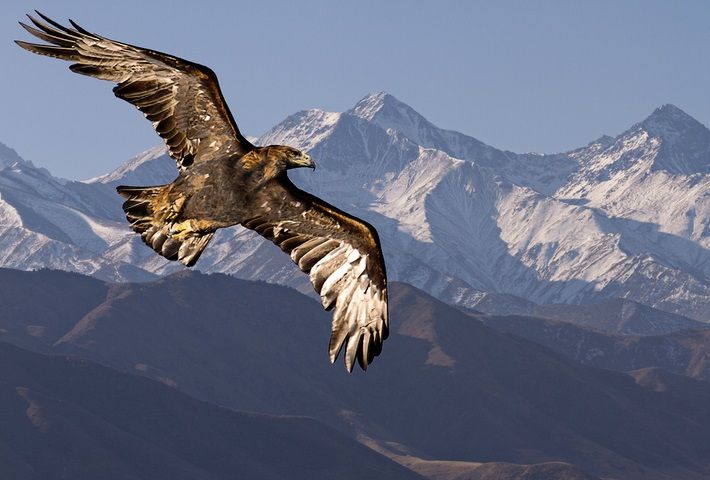 One of the most spectacular events in Mongolia during autumn, the Golden Eagle Festival is celebrated in Bayan Ulgii province, in the far west of Mongolia.

The province of Bayan Ulgii is situated in the breathtaking scenery of the Altai mountain range, where four Asian countries meet. The Eagle Festival is a tournament of falconers from the region, who hunt with trained eagles. Once a year they come together from their home villages to measure their skills. There are about 380 falconers organized in an association.  Eagles – the “feathered dinosaurs of the primeval age” as a National geographer photographer David Edwards puts it-are a symbol and lifestyle for the Kazakh people living in the wilds of far western Mongolia.

Kazakhs, Mongolia’s largest ethnic minority, are known for the enchanting music of the dombra lute, and their unique cultural traditions, such as hunting with a golden eagle. Eagle hunters capture the wild eagles as chicks, which they raise themselves, feeding the growing birds from their own hand to form a stronger bond. Young eagles are trained to hunt foxes and rabbits. To hunt, the Kazakh eagle hunter- falconer his charge’s talons always clutching his arm-rides his horse to the top of the mountain.

They release his eagle, which soars into the sky to survey the earth in every direction for prey. As soon as it spots the prey, the eagle swoops in to for the kill, while the eagle hunter rides after it. A tamed eagle can live up to 32 years in captivity, but as a rule, the birds are set free again after a few years of hunting. A full-grown golden eagle has a wingspan of about two meters and weight of between six and twelve pounds.

The official opening ceremony commences with the participants parading in on horseback with their eagles. The competition begins with each Kazakh displaying his hunting outfit and accessories, the most elaborate and beautiful of which receive the highest points. In the tournament, the eagle hunter has to perform three tasks.

At first, the mounted falconer must call his bird from the top of a hill to settle on his arm. The eagle has to hunt for hides drawn by a running horse. At last, the bird must catch the alive animal, typically a fox. The participants are judged not only their skills in the art of eagle falconry but also by the finery of their attire, the glove, harness and bird’s hood made from deer hide, as well as the traditional hunting dress.

After the falconry tournament, the men engage in riders games, like plucking a flower from the back of a running horse or the traditional “buzkoshi”. There is no other place on earth where you can see so many golden eagles at close range.