The Tsagaan Salaa River flows into the Baga Oigor in the far western region of Bayan Olgiy aimag in the Mongolian Altay Mountains. 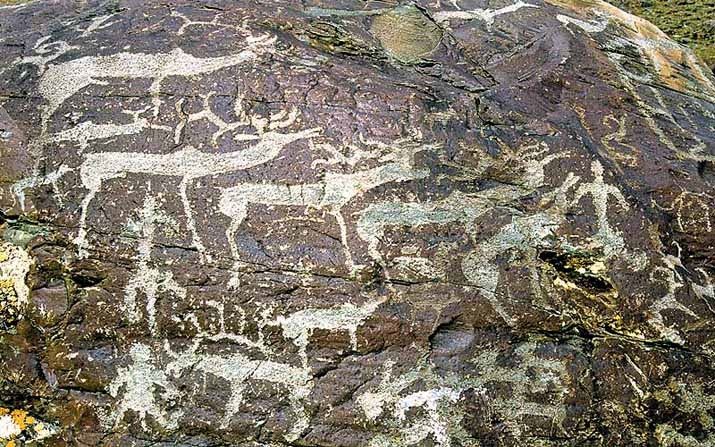 The Tsagaan Salaa River flows into the Baga Oigor in the far western region of Bayan Olgiy aimag in the Mongolian Altay Mountains.

As the joint Mongolian, American, Russian project "Altay" which began in 1994 determined, along the lower Tsagaan Salaa and upper Baga Oigor, is "one of the largest rock art complexes in North and Central Asia, and the richest in terms of chronological age, quantity, and quality of imagery" There are images of various animal species, hunting scenes, and scenes depicting aspects of human life in the region.

We can see humans riding and leading animals, loaded caravans and schematic drawings of what we assume are enclosures. The certain imagery seems clear to have had some kind of religious/ritual significance (for example, bell-shaped anthropomorphs and birthing scenes, arguably amongst the earliest of the images. A great deal of the imagery may be connected with human and animal reproduction. While precise dating is impossible, there are plausible hypotheses which correlate certain themes with different periods, reflecting changes in climate and the patterns of human activity.

Thus, some of the drawings arguably pre-date domestication of animals; the petroglyphs document a shift from dependence on hunting to pastoral nomadism in the period between about 2000 BCE (Bronze Age) and 1000 BCE (early Iron Age). At a certain point, chariots or wagons were being used and their images pecked into the rocks. Scenes with animals being ridden are arguably later.