20 DAYS IN MONGOLIA – BACK TO BASICS TRAVEL

I’ve seen a night sky so clear that I didn’t think you could ever see so many stars, a land so serene in isolation and a culture so welcoming that I hope it never, ever becomes ruined by tourist traps or the greedy grips of mass capitalism (currently contained to Ulaanbaatar). 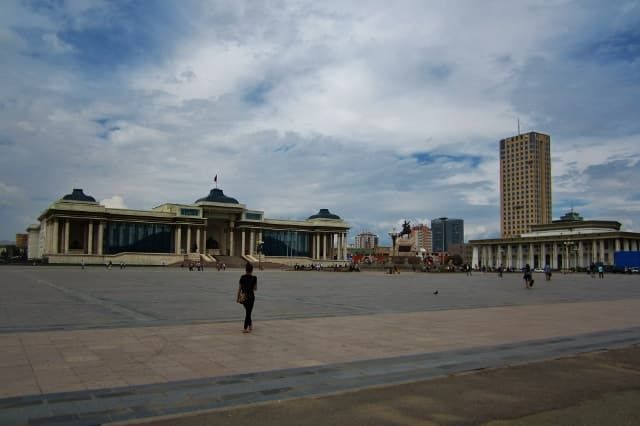 I’ve seen a night sky so clear that I didn’t think you could ever see so many stars, a land so serene in isolation and a culture so welcoming that I hope it never, ever becomes ruined by tourist traps or the greedy grips of mass capitalism (currently contained to Ulaanbaatar).

We spent a full day in Ulaanbaatar  exploring what’s on offer outside of the ugly Soviet communist style architecture and all round dodgy feeling of the city. There’s a plenty to see and do here including a walk through the modern Sukhbaatar (Parliament) Square, the Gandan Monastery, the National History Museum and the shopping paradise of the Black Market. In the evening check out the singing, dancing and contortion talent at the Cultural Show before hitting a few bars and pubs. There’s so many you won’t know where to start.

We set off in the truck from Ulaanbaatar for a drive to the Baga Gazryn Chuluu rock formations in the Gobi desert. Due to heavy traffic getting out of the city and general road conditions we got delayed and so decided to set up bush camp for the evening. Be prepared for delays in Mongolia but delight in being the only people in the area. All the space is yours.

We got to Baga Gazryn Chuluu – rock formations worshipped by locals who make pilgrimages here partly because it is said that Ghengis Khan camped here – before journeying to the Gobi Desert.

On the way we got to experience the famous Nadaam Festival when we passed through the local town of Mandal Govi. It was full of wrestling, horse racing, archery and fairground style fun. Nadaam means ‘games’ and the buzz was all around us. We were the only Westerners there and it was great to be a part of a traditional Mongolian community celebration, even if the afternoon was marred by a bogging which resulted in the truck not being released from the soft mud until midnight.

Today was the day we were supposed to get to our first ger camp but after approximately 30 kilometres we encountered a huge ditch of water on the road resulting in us having to drain the water by hand and build a road and a dam for most of the afternoon to help us get across. Although this sounds horrendous it actually created a great sense of camaraderie and ultimately a huge sense of achievement.  Afterwards we got to camp on a high point of the Gobi Desert instead near to the town of Tsogoovi.

We began our journey without a hitch to the ger Camp called ‘Gobi Discovery’ stopping at the town of Dalanzagad on the way. Mongolian towns are typically very small and compact settlements which are fairly large in size but without the ruin of a city like Ulaanbaatar.

We hiked in Yolin Am, a beautiful canyon in the Gobi which is also an ice valley, and which hosts a huge glacier all year round. The hike was spectacular but, unfortunately for us, little of the glacier remained although we had lots fun playing with what little ice there was regardless.

Lots of sandy riverbed crossings eventually leading us to ger camp number two, Khongoryn Els Ger Camp, where just by opening your ger door you were greeted with a breathtaking view of the Gobi and the Khongoryn Els sand dunes, which I later climbed, drank beer on and ran down. That was after a camel ride of course. When in the desert…

Bumpy mountain roads took us to the spectacular Bayanzag Flaming Cliffs, like a Mongolian version of the Grand Canyon, but smaller, where lots of dinosaur fossils and eggs were found. A great backdrop for bush camping.

When the communists invaded Mongolia in the 1930’s (known as the Purges), nearly all Monasteries were destroyed. Ongii Monastery was one of them and we visited the ruins here before driving to Arvaikheer where heavy rain forced us into a hotel for the night (cue a huge whoop of joy). At times, random bad weather makes bush camping in Mongolia impossible so be prepared for a budget recount.

We began our journey to the third ger camp but got badly bogged around midday after the truck had to swerve slightly of course to miss a drunk driver who came in our path (sadly a lot of people drink and drive here). It took over five hours to get out, with the help of a small local tractor, and during that time a few of us who remained to help with the truck (a few were rescued by local jeeps) lost our minds. It was an hilarious few hours that would have made an excellent documentary and which is probably how a Lord of the Flies scenario starts. We spoke utter shit, laughed at things that were not funny, talked about sex and death (we decided to pen a story called ‘Mud and Fuck’ in honour of our adventure) and got extremely excited by the sighting of a local person.

The roads were not hard enough for the truck to continue, especially with all the hills. After setting up tents and cooking dinner two small vans came to the rescue to take us on our two hour journey to the Ger Camp. It was a scary ride in the dark, where we stopped at the driver’s backyard and where a small boy jumped into the hold of the van for the rest of the journey. We decided to name this poor hostage Wilfred.

I highly recommend staying in a ger camp in the beautiful Orkhon Valley. There’s nothing like a good hike through the beautiful forest to reach the Tuvkhon Monastery and to see the surrounding area. Pure bliss.

The Orkhon Valley waterfall was the next stop on our five hour drive to the next ger camp. This camp plays host to the famous hot springs in the region where I lost my skinny dipping virginity after copious amounts of beer and vodka shots. I still haven’t seen any photos.

Fully clothed, of course, we took a mini hike through the lush green forest to visit the source of the hot springs. When you come across your first sighting of trees after two weeks of barren land you really begin to appreciate such incredible surroundings.

As we had two Mongolian guides with us (invaluable support in a country where very little or no English is spoken or understood) we were able to visit a Mongolian family in the late afternoon to learn about life in a ger. It wasn’t one of those dodgy ‘we have tourists here every week’ set up, but a traditional, local family who lived on an isolated patch of land in the valley. We tried their dairy products (their source of income) including fermented mare’s milk, curd and butter, before learning about ger rules and traditions and asking each other lots of questions!

A quick stop in the nearby town of Tsetserleg was needed to stock up on food supplies. It was market day so the atmosphere was crazy. I get such a buzz from those moments when you really don’t know where you are at and what to do and where you have to work hard to communicate and negotiate.

We later visited what is considered to be the most important Monastery in the country, Erdene Zuu Monastery in Kharkhorin – the first Buddhist monastery in Mongolia which had up to 100 temples and 1,000 monks before the purges in 1937. Only three temples were left standing, alongside a number of statues and other items.

A visit to the museum we camped next to – the Kultigen Monument, housing artifacts from the Turkish empire – set us on the way to the nearby Ugii Lake where we would relax all day and camp for one night. This lake is stunning and would take most of a day to walk around but it’s a great place to unwind and reflect. I count this as one of my most favourite spots in all of Mongolia.

We arrived at Hustain National Park in the afternoon to settle into a ger camp. This National Park is known for its rare Przewalski’s horses unique to Mongolia. It started off like a mad safari where we were expecting to see a Unicorn and in all honesty, I’m not crazy about horses, so when we finally tracked down a small group of them it was a bit of a let down as we couldn’t actually get that close to them.