This is a Group cultural 4WD total 1053km driving tour, a combination of unforgettable Naadam Festival and best destinations in central Mongolia.

Our tour will take 8 days to cover the best travel destinations in Mongolia including the Naadam Festival - one of the main events in Mongolia have been organized since the time of great Khans,

During Naadam Festival, all good sportsmen and women of the country complete in one of the tree National sports competitions that are: archery, horse racing, and wrestling. This is a rare opportunity to dip into magnificent Mongolian culture, along with the eye-opening tour to central Mongolia.

Sainbainuu! Welcome to Mongolia, whenever your international flight lands at “Chinggis Khan” international airport our team will meet you at the airport and you will be transferred to the hotel in the city. Free at leisure for the rest of the day.

You may need some time to relax and recover from the long-distance flight or possibly from jet-lag. If you feel like going for a walk and checking out places nearby, feel free to ask from your hotel reception for recommendations.

After breakfast, we will drive to  Ugii Lake (approximately 4-5 hours)  located up 1337m from the ocean level and it is a pure water steppe lake, which is 7.9km long, 5km wide. The lake Ugii is famous for its birdlife.

Ogii lake has registered in the Ramsar Convention for being important breeding and staging area for a variety of waterfowl. Lunch and check-in at Tourist Ger camp on the shore of the lake.

In the late afternoon is free time for your own. There is you can travel by normal boat or motorboat and go fishing in the lake. Fishing equipment rental is available from the camp. Or just walking and hiking around the lake. Stay overnight at Tourist Ger Camp

After breakfast, we will drive to Tsenkher Valley (approximately 1-2 hours) which  Mongolians call 'The Paradise of the Horse Herders' due to its lush grasses and open valleys, where water flows out of the ground at 86°C, and where we can enjoy a relaxing soak.

The following day we will take a short, easy walk to meet one of the many nomadic families that spend their summers in the region. The afternoon is free to explore the valley and surrounding hills either by foot or by horseback. In Tsenkher we will stay overnight at the tourist ger camp. 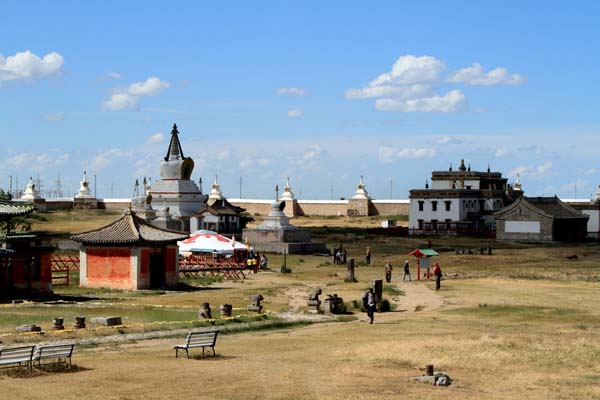 After breakfast, we will drive to the Karakorum and Erdenezuu Monastery (approximately 1-2 hours). We will visit the museum of Karakorum and the symbolic ruins of the ancient city, which was the capital city of the Great Mongol Empire founded in the 13th century by Genghis Khan.

Also visit the magnificent and oldest Buddhist Monastery complex of Erdene Zuu, built in the 16th century, with 108 stupas. Here you can see interesting listen to monk chanting Buddhist sutras.

After lunch, we will drive to Bayan Gobi(approximately 1 hour).  Magnificent sand dunes - surrounded by hills with willow trees, streams, and bushes, and appear as a small desert in the center of the country.

This sand dune is 80km long and the widest part of the sand dune is 9-10 km. Also, the sand dune called the mini Gobi. We will visit the camel herder family and explore their unique nomadic lifestyle. we will stay overnight at tourist ger camp 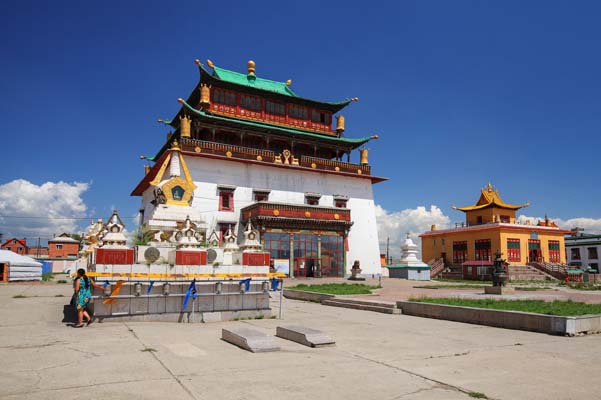 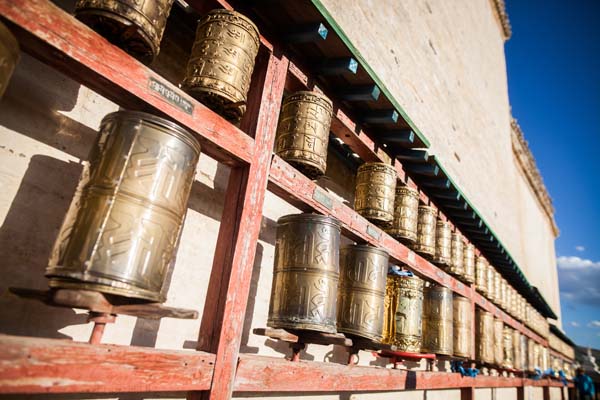 Today we will drive back to Ulaanbaatar (approximately 3-5 hours). After  Lunch, we will visit  “Gandan” Monastery, Mongolia’s largest functioning Buddhist monastery including the Mongolian Buddhist University. The highlight of visiting Gandan is the 26-meter-high majestic gilded indoor statue of Megjid Janraisig.

Afterward, free of your choice. You can be transferred to the hotel for rest and refreshment or go shopping for souvenirs and local products, your guide will be ready to serve you for that. Suggested shopping places are State department store, the famous “Gobi” cashmere factory store.

In the evening, we will visit “Wonders of Mongolia” folklore show by famous Tumen-Ekh ensemble - is one of the most successful folk art groups to share traditional Mongolian music with the world, having traveled to over 40 countries. Will have dinner at 8:00 o’clock we will stay overnight at the Hotel in Ulaanbaatar. 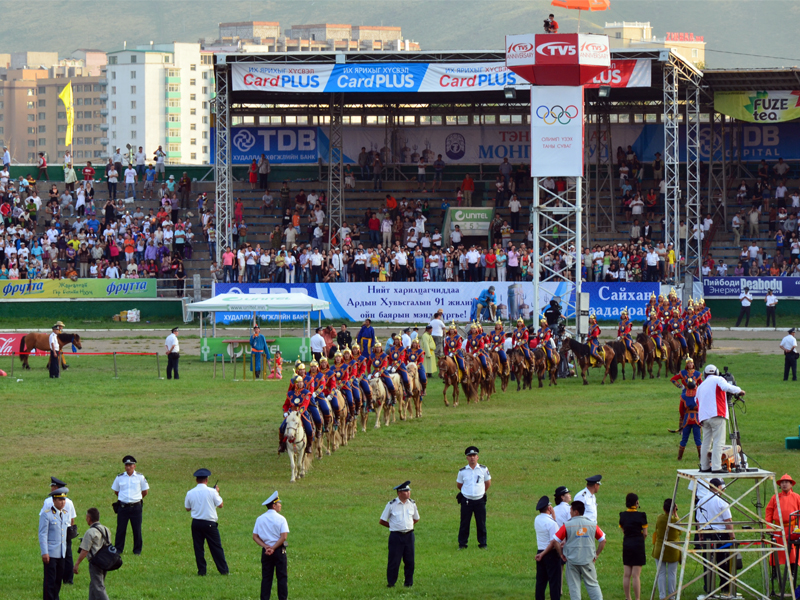 In the morning your tour guide will pick you up from your hotel and we will be attending the opening ceremony of the Festival of Naadam in Ulaanbaatar national stadium. It's Mongolia's biggest, most colorful and most important annual cultural event, focusing on three sports: horse racing,

Mongolian-style wrestling, and archery. It's no coincidence that all three skills derive from the capabilities of Genghis Khan's legendary military - a force that conquered and controlled the largest empire the world has ever known.

After the opening ceremony, we will visit the Naadam archery field beside the central stadium. The archery field will be filled with men and women archers in colorful ethnic national costumes who shooting arrows from their bows. This kind of contest was in existence in the 13th century and was in use until recently.

In the afternoon, we will drive to “Hui Doloon Khudag” (horse racing field of Naadam festival) with Mongolian racers from all corners of Mongolia. You will experience the brilliant madness of the horse race field and the unsurpassed cultural opportunity to watch the horse racing competition included around 250-300 horses. There are you will have a great opportunity to take photography local horse trainers, peoples with traditional garments and so more contrast.

After exploring the Hui Doloon Khudag, drive back to the city and we will re-enter into the Naadam stadium to watch for Mongolian national wrestling, you’ll see many wrestlers wrestling onto the green field. In the usual 512 wrestler tournament, there will be nine elimination rounds of wrestling over two days. There is no weight category in Mongolian wrestling.

We will wander around outside of Naadam stadium to watch locals who dressed their national costumes, food and trade corners etc.
we will stay overnight at the Hotel in Ulaanbaatar. 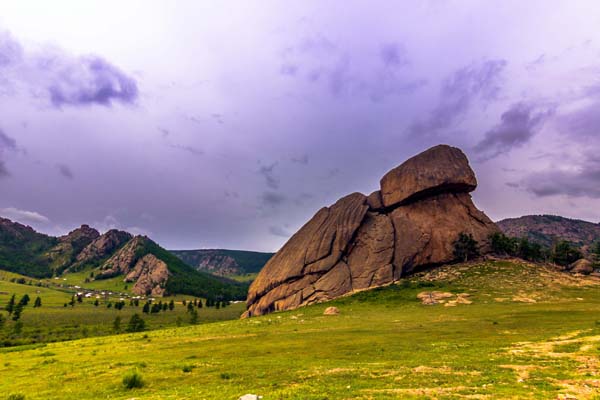 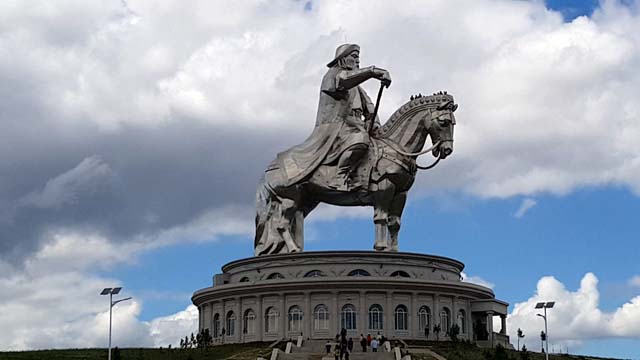 Today, after breakfast we will drive to Terelj National Park. This is one of the most visited national parks in Mongolia which is by its natural beauty, forested alpine mountains and interesting rock formations (Massive woolsack weather conditions) very well known.

On the way visit “Genghis Khan Statue Complex” which is currently the biggest (40m high) equestrian statue in the world. There is a recreation area, restaurants, and souvenir shops occupy the base structure. From here, you can ascend to the head of the horse using an elevator. There you have a good panoramic view of the complex area and the scenery beyond. You are now definitely in Genghis Khan’s country!

From here, we will take a short drive to the Ger camp in Terelj National Park for lunch and In the afternoon, we will explore the national park and see Turtle Rock - interesting rock formation looking like a turtle. Also, visit Ariyabal meditation temple - surrounded by scenic mountains with massive rock formations and sits at top of the mountain. From the top, you can enjoy the breathtaking view overlooking the Terelj National Park. we will stay overnight at the Hotel in Ulaanbaatar.

You will be free at leisure in your hotel or wander around on your own until being escorted to the Chinggis Khaan International Airport for your departure flight home.

Your driver will assist you with flight check-in and luggage, and see you off at the point of security check.  Note: You must be at the Chinggis Khaan International Airport  2 hours before your flight time.